She’s ready to shine the Kimpton Surfcomber Hotel with her electrifying, magnetic personality. Born and raised in Venezuela, Michelle fell in love with music at the age of 4, and music fell right back in love with her. Growing up, she began to perform in talent competitions and local school events where she received overwhelmingly positive responses from her audiences, leading her to be a lead singer of 3 local musical bands in Venezuela by the age of 16.

However, this all changed when her father’s life was threatened by the Venezuelan government, ending her short-lived moments of fame. Michelle seized the opportunity to move to the Miami, U.S., not only to pursue a career in music but to also work and send financial help for her mother back in Venezuela.

She has always had dreamed of using her platform to become a voice for her country and other kids in the world. In 2015, Michelle auditioned for big shows like “American Idol”, “America’s Got Talent”, “The Voice”, and “La Bamba” with little success. Yet, this did not disillusion Michelle, for she continued to work with her talent and received vocal lessons with Mariana Martinez.

Fast forward to 2017, Michelle re-auditioned for “American Idol” and received a completely different response than the first time around. She received a call from Amy Elkins, the producer, the same day as she auditioned to fly her to Los Angeles to audition in front of the judges. Auditioning with her Spanish version of “If I Were a Boy”, she was able to move forward onto Top 10.

Since the show, Michelle has assembled a strong team of knowledgeable managers, Grammy nominated producers and songwriters to develop a sound that will shock the world. Michelle is very excited to show the world how she and her team is able to fuse Pop and Latin culture. Despite all the hard-comings she’s gone through, she continues to have an infectious positive glow around her. 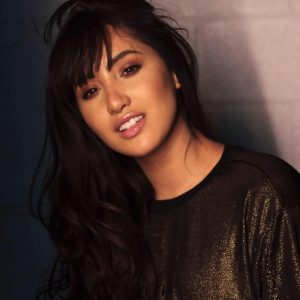