Dare we say it but Miami has seriously fantastic new music brewing. On any given night you can dip into one of the local live music venues like Churchill’s, Sidebar, Gramps, and others, and find really great original music. There are a lot of new artists, and bands performing but two that we want to focus on are Ketchy Shuby, and Magic City Hippies, two bands that you have to try and catch live if you come to Miami. We feel that if these two bands break out nationally the American music scene will be a whole lot more fun. 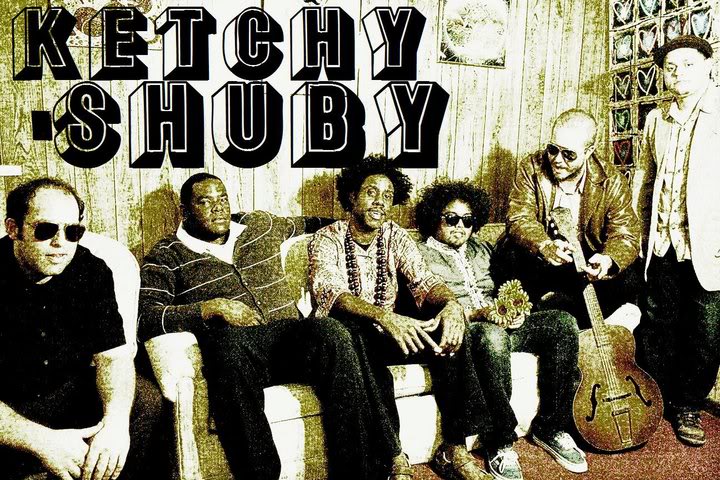 Ketchy Schuby is kind of like a really young and current version of the Blues Brothers, which I kind of hate to say for fear of it conjuring up images of kitsch. I only really say that because the music is throwback soul and the lead singer looks like the cuban cousin of Jim Belushi.

Ketchy Shuby is made up of six members, all in their mid-20s. Their roots range from Jamaica, Cuba, and Puerto Rico to Miami. They came together in 2008, and created a buzz on the live circuit by combining new sound with old soul to earn its “downtown” moniker. The group’s 28-year-old lead vocalist and guitar player, Jason Joshua Hernandez-Rodriguez says “It’s jazz, it’s ’60s rock, Afrobeat, reggae, ska”

Percussionist Danny Quinto adds, “Our music is Curtis Mayfield, Santana, Miles Davis, Fania All-Stars, mixed with MGMT, Kings of Leon, and the Budos Band, to name a few.” Whew that’s a lot but it is a mix of funk, and rock for sure. Most of all its feel good music they are a super charismatic band live. Listen here.

The Magic City Hippies, well let’s start with the name. It kind of just makes you smile doesn’t it. The band was started by Robby Hunter a local solo artist who would restyle hip hop hits into cool covers on his acoustic guitar and track machine. He teamed up with a dynamic drummer, Pat Howard and the multi-talented John Coghlin on keys, bass and guitar. We don’t know that much about these guys accept that they’re adorable, and they literally get a club full of people dancing in minutes, which we’ve seen personally. Check them out below: