Taylor Swift went full glam at the MTV Video Music Awards on Sunday night, in an Oscar de la Renta mini dress draped in crystal chains. Featuring a high halter neckline and no shortage of sparkle, the look balanced elegance with sexiness as it provided peekaboo glimpses of the singer’s torso.
Swift teased the look on TikTok, posting a before-and-after video of her preparing for the awards. To the sound of Blackpink’s new single “Pink Venom,” the last clip shows her striding toward the camera alongside the video’s co-star Dylan O’Brien and cinematographer Rina Yang.
“Team ‘All Too Well’ bringing the emotional pain to the VMAs,” she wrote in the caption. 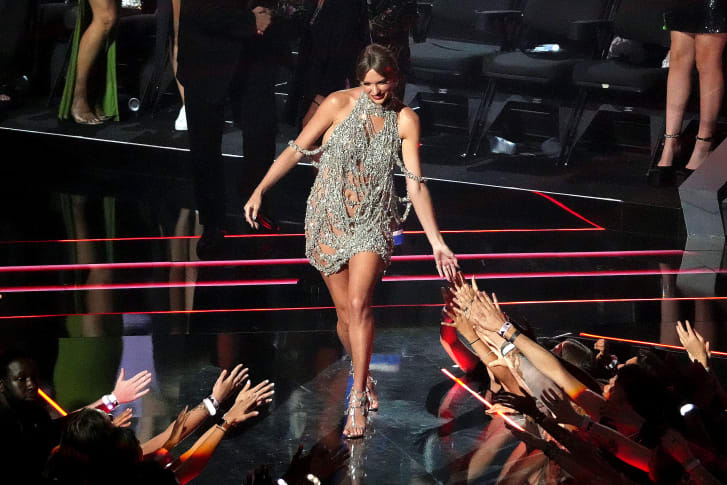 She dropped a major bombshell during her Best Music Video acceptance speech: the release date for her upcoming album which will land on October 21.
Elsewhere, the VMAs saw adrenaline-pumping performances by the likes of Blackpink, Lizzo and surprise star Fergie, who joined co-host Jack Harlow for a rendition of his tune “First Class.” Celebrities including Lil Nas X and Conan Gray also wowed the red carpet in stunning gender-fluid ensembles, while the likes of Chloe Bailey and Sabrina Carpenter also opted for shimmering numbers.