Jared Leto is no stranger to making a bold fashion statement- especially at Red Carpet events, including the Met Gala, where he even wore his own head as an accessory! Many of you might already know about his upcoming film Morbius which comes out on April 1st. If you have not heard about it yet, or are not familiar with the Marvel comics character, here is a little breakdown of the plot. Michael Morbius (played by Leto) is a biochemist, who tries to cure himself of a rare blood disease that he has had since a young age, but when his experiment goes wrong he ends up infecting himself with a form of vampirism instead. The character is seen as an anti-hero, but most commonly a villain. 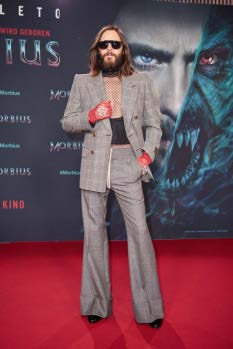 For the premiere in Berlin, Jared Leto was, to no surprise, dripped in Gucci. He wore a grey plaid double-breasted suit, with flare legged bottoms. To add a bit of himself to the look, Leto added a sheer polka-dot top and buttoned cummerbund, with a pair of unexpected red, crystal embellished driving gloves, that were perfect for the occasion! I for one cannot wait to see what other looks Leto pulls off in the future, especially if he attends this years upcoming Met Gala!