On December 23rd, 2021, the world lost one of the biggest icons the writing world has ever seen.
Joan Didion was known for her powerful writing skills. Most of her pieces were focused on
culture and the Hollywood lifestyle. Her novels “Play It as It Lays” and “A Book of Common
Prayer” introduced the arrival of a tough, distinctive voice in American fiction. According to an
email sent by Paul Bogaards, an executive at Knopf, and Joan Didion’s publisher, the cause of
death was complications of Parkinson’s disease. She was 87 years old. Many will remember Joan
as a pioneer for culture writing in the late 60s’ and the 70s’. Writer Katie Roiphe said this about
Joan in an interview, “Her talent was for writing about the mood of the culture . . . She managed
to channel the spirit of the 1960s and ’70s through her own highly idiosyncratic and personal —
that is, seemingly personal — writing. She was perfectly matched to the times, with her slightly
paranoid, slightly hysterical, high-strung sensibility. It was a perfect conjunction of the writer
with the moment.” Before becoming a freelance writer, Joan Didion was writing for Vogue,
Mademoiselle, and National Review by the early 1960s’, often on topics like “Jealousy: Is It a
Curable Illness?” (from Vogue’s June 1961 Issue). 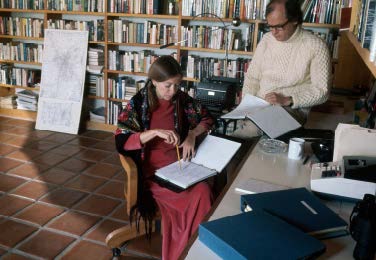 Joan Didion left us with a legacy we will never forget. She even wrote many popular screenplays
for films such as “Panic in Needle Park,” a film that gave Al Pacino his first major starring role,
and she and her husband also rewrote “A Star Is Born”. So it is safe to say that Joan Didion is
truly an icon, for her breakthrough writing skills, and personality through her reporting. If you
are not familiar with any of her pieces/novels, a list with a select few is curated below.
Joan Didion Books:
“Slouching Towards Bethlehem”
“The Year of Magical Thinking”
“Play It As It Lays”
“Let Me Tell You What I Mean”
“Blue Nights”
“Where I Was From”